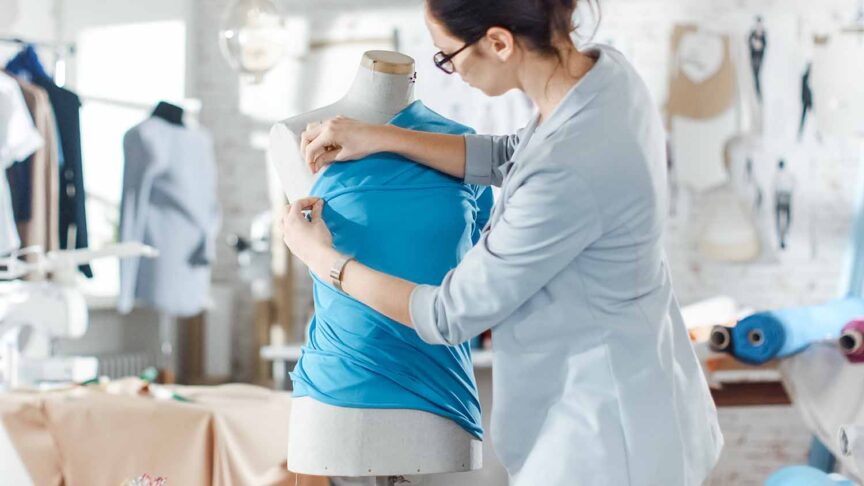 Draping in fashion design is not as popular as it used to be, but it is still used in elite circles. Some styles and certain fabrics just must be draped to get an accurate idea of how the finished garment will look.

Fashion design draping is the process of creating a new pattern by pinning pieces of fabric onto a dressmaker’s form.  Usually, each section of the garment is pinned separately, and all sewing information is marked. Then the entire garment is pinned together on the form and checked for an accurate fit before the pattern is transferred to paper.

Draping is a fascinating process that can be used to create unique garments. Having the ability to see how the garment will hang on the form allows for greater accuracy in cutting and sewing. We will take an in-depth look at this process.

What Is Fashion Design Draping?

Draping is the way designers create new style patterns. After measurements are taken, a cheap fabric, usually muslin, is chosen to create the mock-up or sample garment.

Cloth is pinned onto a dress form, and the way the fabric naturally hangs gives the designer new ideas for a pattern.

The steps in pattern making are crucial. So when the designer already has an idea for the pattern, he/she can use a sketch of that idea as a guide for pinning the fabric to the form.

Piece by piece the cloth is pinned on the form and fitted properly. Each piece is marked for:

Once all pieces have been fitted and marked, the fabric is laid flat and all the markings are perfected and finalized using rulers and design curves; a process known as “truing”.

When all markings are finalized, and seam lines added, the extra fabric is trimmed away, and each piece is pinned back on the form.

Darts are pinned up, and any extraneous parts of the garment, such as peplums or ruffles, are draped.

Each piece is checked for proper fit, and then all the pieces are pinned together on the form and checked for an accurate fit as a whole.

When the fit is satisfactory, the garment is taken apart and removed from the dress form. Each piece is pressed flat, and every marking is transferred to paper.

The paper pattern must reflect the proper place for each:

This creates paper patterns for non-designers to use in making their own clothing.

Unless the design is asymmetrical, only one side needs to be draped. The pattern for that side can then be reproduced in reverse for the opposite side.

This saves time since the measuring and marking need to be done only once.

If the two sides are asymmetrical, the process is a bit more complicated, but follows the same basic rule. In these cases, each side has to be measured and marked separately.

Once the pattern has been perfected, the real garment is cut from more expensive material. The designer now knows exactly what to expect and how to form the garment.

What Is The Importance Of Draping?

Draping is important because it allows the designer to see in real time how a garment will look when worn. It allows them to correct any errors almost instantly before the pattern is created.

This saves time and money since it reduces the amount of trial-and-error needed to get the fit accurate. It is much easier to re-pin a piece on a dress form than to correct erroneous markings on a pattern. There’s also pattern making software which can further facilitate the creation of a pattern.

Draping allows designers to divine which types of fabric will work best with their patterns.

For the home dressmaker, draping allows for creativity in design while reducing waste.

This process allows them to make modifications on inexpensive materials to get the design right before cutting the more expensive fabric that the garment will be made from.

It also shortens the process for the person who is making just one garment in a certain style. There’s no need to transfer the markings onto paper. Just cut by the draped pieces and sew.

Draping can be regarded as creating the blueprint from which the article will be produced. It is a design that can be reproduced many times over with absolute consistency.

Three Fashion Designers Who Use Draping

Draping is not used as much today as it once was. The innovation of computerized programs has replaced the practice of draping for most pattern manufacturers. But in haute couture, draping is still used by some designers.

Many lingerie designers still adhere to draping techniques because it is absolutely essential that lingerie achieves the proper flow for comfort.

Some designers of high fashion also drape their designs despite the trend toward flat-pattern making.

Here we will consider three such designers who adhere to the tradition of fashion draping when creating their patterns. They include:

Lulu is an Indonesian designer who likes to combine tradition and innovation. His sense of style is unusual, to say the least.

He practices fashion draping in crafting his unique creations, which have earned him a knighthood in fashion. His fashions couldn’t be crafted without draping.

His pieces are usually asymmetrical and unpredictable. However, they are extremely versatile. He specializes in ready-made clothing suitable for almost any occasion.

Following the Japanese tradition of finding beauty in imperfections, he does not try to hide flaws or irregularities. They are part of his originality and creativity.

Parisian designer Herve Leger specializes in skin-tight, slimming designs. He is famous for the so-called “bandage dress” that still dominates his style today.

To get his creations fitting as closely as they do, he practices the tradition of draping. It would be impossible to get his style of dress right without draping because it fits as snugly as your skin.

Draping is the only way to ensure that the pattern will move and bend with the wearer since most of his creations don’t reach the knee.

A style this short and tight would be a monster to fit correctly without the benefit of draping.

Alberta is an Italian-born designer who has boutiques in several countries of the world. She is known primarily for her party-style outfits.

However, there is an unbelievably wide range of styles in her repertoire. Anything from ball gowns to army-style fatigues can be found under her label.

Her best loved styles feature the intricate hand-designed details that can only be accomplished through draping.

Tucks and pleats adorn many of her creations, and plenty more from evening gowns to wrap tops feature graceful ruffles and scallops.

These can only be designed to perfection using the draping technique. Clearly, Ferretti has mastered the art of draping.

Two Types Of Draping In Fashion

As with any industry, fashion design is constantly testing new ways to increase efficiency and reduce cost.

These efforts are revolutionizing the way designers create their patterns. Two types of fashion design draping are now in use within the fashion industry. They include:

Each has its own set of advantages and drawbacks.

The type of fashion design draping that we have discussed is physical fashion draping. This involves real fabric and a physical mannequin or dressmaker’s form.

This is the type of draping designers are most familiar with. A sample garment is created from cheap material using the draping method discussed earlier.

Then the real garment is cut from more expensive fabric, using the sample garment as a pattern.

The advantage of this type of draping is that you can see in real time how certain fabrics respond to different configurations and how gravity affects the hang of the garment.

One major drawback to this style of draping is the waste of fabric. Designers are coming under fire for wasting resources and driving the cost of clothing higher to cover the expense of wasted fabrics.

Many designers are attempting to reduce their environmental footprint while continuing to produce unique fashions.

Since many of these creations feature pieces cut on bias with scores of tiny pleats or tucks, it naturally follows that yards and yards of material are used.

And inevitably, several inches more will be rendered unusable because of how the pattern must be cut.

Physical draping also takes a lot of time because ideas must be endlessly tweaked and altered to get the desired effect.

For this reason, many designers are looking for more resourceful ways to create their masterpieces.

It is done on computer with specialized software that is programmed to recognize the characteristics of different materials. It is intended to give the designer a realistic idea of how fabrics will respond to their design ideas.

Initially used for computer game avatars and virtual characters, it has now advanced to become a designer’s tool.

The advantage of this type of draping is that, in theory, at least, there is no wasted fabric to dispose of. This could mean stabilized costs in the clothing sector as well as a smaller environmental impact.

It also purportedly saves time since there is not the actual cutting and pinning pieces onto the form.

The pattern can be digitally sized to fit any body type. Markings can be easily erased and moved with the click of a mouse.

The downside of this type of draping is that the representation of how the fabric behaves may not match the reality.

All these characteristics affect how the fabric adapts to the pattern. As well, fabric responds differently to a live human body than to a plastic mannequin.

Efforts are being made to increase the efficiency and accuracy of the simulated representations, but this will take time.

Draping Will Continue To Be Used In Fashion Design

Draping is in no danger of becoming obsolete in the world of fashion.

Whether by physically draping a dress form in the old-fashioned way or simulating the computer’s technique, draping will remain an important part of fashion design for many years to come. 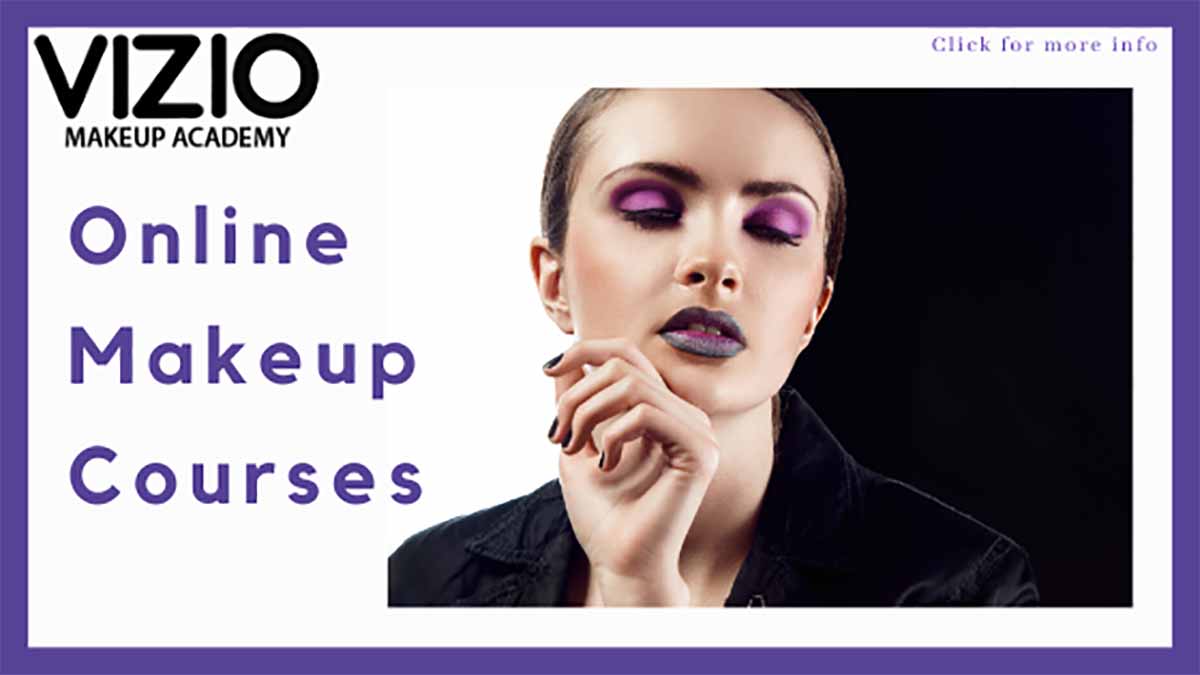